Cave of Light in the Himalayas 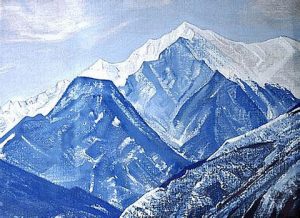 The Cave of Light is the retreat of the Great Divine Director in the heart of the Himalayas in India. His second spiritual home of light is the Rakoczy Mansion in the Carpathian Mountains of Transylvania. Chananda is the hierarch of the Cave of Light, which is located in the mountain behind his retreat, the Palace of Light.

The Great Divine Director is a great initiator on the path of the ascension, and one of the purposes of the Cave of Light is to conduct activities to prepare and accelerate candidates for the ascension. Here, the Great Divine Director uses his authority to purify the four lower bodies of advanced initiates of a portion of their remaining karma, to give them purified vehicles to render a cosmic service in the world of form prior to their ascension.

On occasion, unascended lifestreams are taken in their finer bodies to the retreats of the Brotherhood in order to be trained for special service in the world of form that requires superhuman strength and certain disciplines that can only be imparted to the unascended initiate in the retreats. Thus, Jesus was taken into the Luxor Retreat and into the Temple of the Blue Lotus prior to his final three-year ministry.

Godfré and the Cave of Light

Some who have been commissioned to go forth in the name of the Brotherhood and who had not yet transmuted their remaining karma received the assistance that was given in the Cave of Light to Godfré, Rex and Nada Rayborn, and Bob and Pearl Singleton whereby their four lower bodies were purified and aligned in order that they might be the immaculate receptacles of the Christ consciousness. When this dispensation is accorded worthy chelas, their remaining service to life is magnificently accomplished because their consciousness has become the perfect focal point in the world of form for the release of the entire Spirit of the Great White Brotherhood.

Miracles, demonstrations of alchemy, and the control of natural forces and elemental life become the mark of those who are so blessed by the opportunity of being “perfected” prior to their final initiation and ascension in the light.

In The Magic Presence, Godfré Ray King describes being escorted to the Cave of Light by Chananda, along with Rex, Nada, Bob and Pearl. He describes the retreat as a cave of “wondrous beauty” encrusted with dazzling crystalline substance similar to the Cave of Symbols in America. Going far into the cave, they came to doors of solid gold. Inside, it looked like the white heat of a great furnace. Two days and two nights later, they emerged from this Eternal Flame wearing “new bodies of immortal endurance.”1

Mighty Light Focuses in the Cave of Light

The Great Divine Director has spoken of some of the magnificent focuses of light within his retreat:

“Do you know also that even in the Cave of Light in India there are replicas of light-magnificence concerning liberty and freedom? Do you know that the replicas and symbols of divine light for and on behalf of America were created by the ascended masters, and they are talismans of great power. Out of these talismans, beamed by the angelic beings and focused by a greater power than in the ancient Atlantean crystals, manifests the intention of Almighty God for this nation!”2

Mother Mary on the Cave of Light Within

Mother Mary has spoken of the Cave of Light as symbolizing the secret chamber of the heart. The Blessed Mother explains that

“In all eras, initiates processioning into the interior place prepared have signified that the hour is come when for the individual and even for a civilization there is the great inbreath—not that which draws in all of a cosmos, but that drawing in, beloved, of the seven rays of attainment that these might be condensed into the crystal that is formed in this interior castle.

“There comes the hour when the expansive manifestations of attainment, of God-mastery, even the accumulation of abundance must now be condensed. And that which is the heart and the essence of the harvest then becomes the nucleus of crystal, harder than rock or diamond. This substance, beloved, begins to form the cave of light.

“Now you understand the use of the term ‘Cave of Light’ by the Great Divine Director. Blessed ones, his Cave of Light is a consecration to the eighth-ray chakra and the secret chamber of the heart. Not only is it a place of safety, a haven of initiation, not only is it the place where the soul puts on, enters into [the Christ consciousness], but as Christ assimilates her, so the soul and the Christ become one. Thus, in the next round, when going forth from the secret chamber as from the tomb itself, beloved, the soul steps forth fully the manifestation of Christ, the Body and Blood of Christ, the Sacred Heart of Christ.

“Thus may you understand a mother’s teaching in this hour of the commencement of initiation of the five secret rays – five levels, then, of the secret chamber of the heart, as though five spherical, interlocking chambers. May you enter. May you understand. May you know.

“Going to the Heart of the Inner Retreat is another symbolical and actual entering in. Blessed ones, I bring this initiation to your attention, for the hour is coming when you will know the meaning of the word ‘s3

Many ascended masters frequent the Cave of Light. Saint Germain spends a great deal of time there. Chananda tells us that he will be there to welcome us also, in the name of the Great Divine Director. Leto also calls us to this retreat, describing it as “a home of light that you will scarcely desire to leave. The Cave of Light is a forcefield incomparable; an invitation to be there is worth gold itself…. Forget not to call to me in the hour of your journey to the Cave of Light, and I will come with angels shining with a purple light to arc your soul to the special room and the special chair.”4

Great Divine Director’s Invitation To The Cave Of Light

The Great Divine Director himself invites us to his retreat, but asks us to first prepare ourselves by devotion to the will of God. He says:

“I bid you to come to the Cave of Light when you are ready. And I say, do not come until you are ready, for the doors will not open and the welcome mat will not be out unless you have fully prepared to surrender your all, your life, your service, your will to the will of God. And then we may require that you serve a time in another retreat before you are accepted into that Cave of Light.

“Thus realize that the disciplines of our branch of the hierarchy involve the tethering of the soul to divine direction. If you cannot hear that direction, you will not be ready for our retreat. Thus, you see, you must he tutored in developing the sensitivities of the soul consciousness so that you can be certain when the Lord God, through one of his emissaries, places the rod of power upon you and gives you the key of light and the rod of power that you will detect that direction and follow it to the fullest capability of your consciousness.

“Thus, discerning God-direction is a science in itself, and you will learn much of that science at the ascended masters’ university. You will also learn it in the retreats of the violet flame presided over by Lord Zadkieland by Saint Germain, for these prepare souls for the Cave of Light. And thus these hierarchs should be appealed to.

“As you retire each night and take your leave of your physical body, the soul travels in its etheric envelope. And if you invoke these masters ere you leave, they will guide you unerringly to the place prepared, the manger, the haven of light in one of the retreats of the Brotherhood where the Christ can be born in you and where you can bear the Christ for all mankind.”5

Father, into thy hands I commend my spirit.
O my soul, let us arise from our abode.
Mighty I AM Presence and Holy Christ Self, with Archangel Michael and a cordon of blue-lightening angels, transport my soul clothed in my finer bodies, fully equipped with the armor of God, to the Great Divine Director’s Cave of Light retreat in the Himalayas or to the designated place of my Holy Work this night. Escort me, instruct me, and guide and protect me and all co-servers, I pray Thee, now and always as we serve to cut free all life on earth.

Etheric Retreats of the Manus

Books by Mark and Elizabeth Clare Prophet on the Great Divine Director, Saint Germain, and the Violet Flame. Spiritual books showing how to work with the violet flame to clear the obstacles to your divine plan for effect personal change and world spiritual transformation: