The Temple Of Mercy

The Temple of Mercy is the etheric focus of Kuan Yin, the Goddess of Mercy. It is situated in the foothills above Beijing, China. In this retreat, a central pagoda with golden dome rises above twelve surrounding pagodas, each of which focuses the yin and yang qualities of the twelve hierarchies of the Sun. 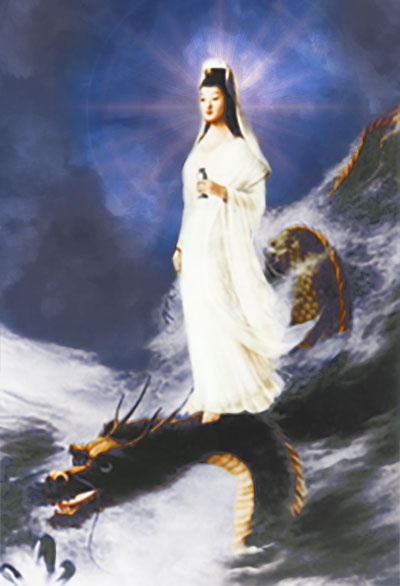 The Temple of Mercy, etheric focus of Kuan Yin, the Goddess of Mercy, is situated in the foothills above Beijing, China.

In this retreat, a central pagoda with golden dome rises above twelve surrounding pagodas, each of which focuses the yin and yang qualities of the twelve hierarchies of the Sun.

The plus and minus factors of each of the lines of the cosmic sundial are reproduced here musically by the representatives of each of the hierarchies serving in each of the twelve lesser pagodas. The cosmic hum that comes forth from the Great Hub is reproduced in the central tower as the music of the spheres. It is a combination of these plus and minus factors of Alpha and Omega in unique combination in each of the twelve houses that produces the action of the mercy flame that is in the central focus under the golden dome.

The music of the twelve pagodas of the Temple of Mercy is the origin of Chinese and oriental music. The influence of the focus of the Mercy Flame retreat gives oriental art its uniqueness.

The entrance to each of the twelve temples has pieces of crystal and precipitated metal hanging above them that chime the notes of the temples as the wind blows. A circular stairway spiraling along the periphery takes us to the top of each pagoda. There are landings at four levels where the tones of the yin and yang aspects of the hierarchy represented are released.

In the central pagoda silence has been observed for centuries. The flame of mercy pulsates within a golden urn on an altar that is carved of ivory. The central pagoda is six stories high. This imposing building has many flame rooms, council chambers and classrooms.

Service of the Brothers and Sisters of Mercy

This retreat is a haven of compassion where the Brothers and Sisters of Mercy serve and receive from the world those souls who require respite and a saturation of the forgiveness flame. After their stay at the retreat, they are able to return once again to embodiment, to fulfill their divine plan and to balance the debts they owe to life.

The Power of Kuan Yin’s Heart

Kuan Yin is truly a cosmic mother; the tenderness of her heart’s love for all who come here melts even the most dense of human creation and spurs those with even the heaviest karma to renewed service and an invocation of the violet flame of forgiveness. So great is Kuan Yin’s compassion and forgiveness that everyone who comes to the Temple of Mercy leaves knowing that because they are loved, they can go forth to try again and to succeed.

The momentums of gentleness, of devotion to family, of service to one another that are so special in the Chinese people come from the action of the mercy flame of this retreat.

Prayer to Kuan Yin Before Retiring

Call in the name of your own Christ Self to Kuan Yin to invoke her help on the path of mercy and forgiveness.

In the name of the Christ, my own Real Self, I call to the heart of the I AM Presence and to the angel of the Presence to take me in my soul and in my soul consciousness to the Temple of Mercy retreat of Kuan Yin. I ask to learn the way of mercy and forgiveness and the lessons needed to understand how to fulfill my divine plan and to balance the debts I owe to life. And I ask that all information necessary to the fulfillment of my divine plan be released to my outer waking consciousness as it is required. I thank thee and I accept this done in the full power of the risen Christ.

Summit Lighthouse Books on the Teachings of the Ascended Masters:

Books by Mark and Elizabeth Clare Prophet on the teachings of the ascended masters. Spiritual books showing how to work with the Chohans and implement your divine plan for personal change and world spiritual transformation:

Kuan Yin’s Crystal Rosary 4 Audio CDs exquisitely recorded with temple bells, gongs, harmonium, kartals, balaram, guitar and hundreds of voices, a majestic synthesis of Eastern temple worship with Aquarian Age accents. Includes:
• 10 Vows of Kuan Yin
• 14 Kuan Yin Mantras for the Woman and Her Seed
• 33 Mantras to the Manifestations of Avalokite´svara as Kuan Yin
• 7 Songs to Kuan Yin and God’s Flame of Mercy and Forgiveness
• The New Age Hail Mary with the Magnificat and the Ave Maria
• 9 Dynamic Decrees to the Heavenly Hosts