Spiritual Retreat of the Elohim of the Third Ray 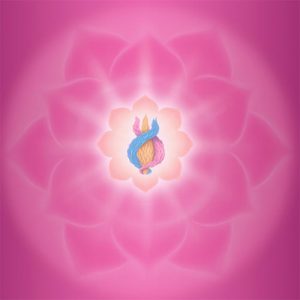 The Elohim of the third ray, Heros and Amora, focus the energies of the heart chakra of the planet in their retreat located in the etheric plane over Lake Winnipeg, Manitoba, Canada.

The forcefield of this temple and the temple itself are designed after the pattern of a budding lotus whose petals are not quite expanded. The temple is square, made of rose quartz, with giant petals rising at each corner and a tall steeple at the entrance. From the tip of each petal to the center of the sides of the temple extend two bands of a metallic-like substance that serve as conductors of light. There are three petal-shaped doors at the entrance of the retreat, which is in the tall spire in the center of one of the four sides.

Inside Heros and Amora’s Retreat

Going through the entrance down a central hallway, we approach the sunken altar of the love ray. Here the pink plume of the love flame burns in the center of the first floor. Three tiers descending into the floor form the bowl for the flame, which is surrounded by carved petals. Three other arteries proceed away from the altar to petal-shaped classrooms that are within the four squares into which the first floor is evenly divided.

There are four levels in this retreat, the second and third floors consisting of chambers used by the pink-flame angels who serve here and the masters who frequent the retreat. On the top floor is the throne of the Elohim in a large round room, an audience chamber, having the appearance of a disc with beautiful carvings in the stone walls.

Throughout the retreat are sculptured art forms that convey the action of divine love to the universe, its cohesive power within the atom and in galaxies. Meditation upon these sculptures infuses the consciousness with the understanding of the laws of love and their operation at every level of consciousness, for they key into the patterns within the atom and the cell of man where the laws of God are written in his inward parts. Therefore, upon seeing these sculptures, the individual ties into that which he already knows, and he becomes that knowledge through meditation.

Effect of Third Ray Retreat in the Western Hemisphere

It is extremely significant to have a retreat of the Elohim of Love as a focus of divine love in the Western Hemisphere. This retreat guides the destiny of North and South America.

The radiance of the pink flame from the heart of Heros and Amora together with that of Archangel Chamuel and Charity forms an arc of love connecting the retreat over Lake Winnipeg with that of the archangel and archeia of the third ray over St. Louis, Missouri.