Saint Germain’s Spiritual Retreat, The Cave of Symbols in the Rocky Mountains

This is an important focus, and many inventions are to be released from this retreat. Saint Germain uses this retreat along with the Rakoczy Mansion in Transylvania, the Cave of Light in the Himalayas and the nearby Royal Teton Retreat in the Grand Teton range.

Interior of the Cave of Symbols

One enters through a cavern in the mountain lined with pink and white crystal and then moves on into a vaulted chamber two hundred feet wide covered with stalactites of rainbow hue in the formation of occult symbols. As focuses of the rainbow rays of God and geometric keys to the release of fohat, the energy that blazes through these symbols extends throughout the United States. This energy has a most significant influence upon her people, keying into their consciousness the matrix of the golden age and the remembrance of their lost inheritance. The cave derives its name from these symbols.

On the opposite wall, at the far side of the chamber, there are three arches, spaced twenty feet apart: the first a deep rose, the second a penetrating white and the third a cobalt blue. These are the focuses of great cosmic beings for the victory of the Christ consciousness in America. 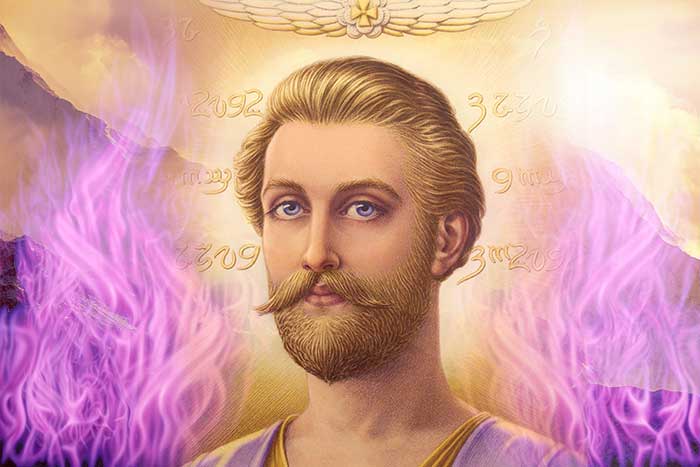 Accompanied by the ascended master Saint Germain, who raises his hand toward the center archway, we gain entrance to a tunnel that opens at his command. After several hundred feet, he shows us through a door on which there are more ancient symbols into a twelve-sided, domed room sixty feet in diameter. Immediately we notice that four of the twelve sides are a brilliant white (focusing the purity of the Christ consciousness in the four elements and the four lower bodies of the planet). The remainder are the pastel hues of the rays.

Cave of Symbols: Home to Many Inventions

In this room we are shown the fantastic radio invented by the ascended lady master Leonora, by which one can communicate with other planets in this solar system, with the center of the earth, or with any point on the surface of the earth. There are chemical and electrical laboratories where scientists are perfecting formulas and inventions they have been permitted to take from the hermetically-sealed cities at the bottom of the Atlantic Ocean. These cities have been protected since the sinking of Atlantis. These discoveries will be brought forth for mankind’s use in the golden age, just as soon as man has learned to harness greed, selfishness and the desire to control others through war and dishonest financial policies.

When the Sons of God are once again in control of the great nations of the world, the ascended masters will step forth with a tremendous wealth of information that has been guarded in their retreats for ages. Unascended scientists come here in their finer bodies while asleep or between embodiments.

Students of the light can also ask to be taken to Saint Germain’s Cave of Symbols. Saint Germain is training a large cadre of souls devoted to the Christ and to the science of the Christ, who at the proper time will have lowered into the outer consciousness all that they have learned in this and other retreats of the Great White Brotherhood.

There is an “atomic accelerator”—a golden chair through which are passed electronic currents that quicken the vibratory pattern of the atoms and electrons within the four lower bodies. Initiates of the Brotherhood who have proven their merit by service and devotion to the light and who have already balanced a considerable amount of their karma are allowed to sit in this chair for a length of time prescribed by the master Saint Germain and the Lords of Karma. By accelerating the light frequency in the four lower bodies, a portion of one’s karma is balanced and a portion of one’s misqualified substance is thrown off by the centrifugal action produced by the revolving electrons and transmuted by the sacred fire.

Thus, the individual’s four lower bodies can be accelerated in ascension currents and the soul raised into the ascension. Under the sponsorship of Saint Germain, many lifestreams have ascended from this room.

Entering Further into the Retreat

Entering an elevator, we descend a hundred feet into the heart of the mountain, emerging in a circular room having a diameter of twenty feet. We are led through a door into a huge hall equipped with furnaces and machines for the production of materials used in the experimental work carried on in the chemical and electrical laboratories in the upper level of the retreat.

Returning to the upper level, we are shown a reception hall with a domed ceiling, adjoining sleeping quarters, and an audience hall also with a domed ceiling of sky blue with painted clouds, giving the impression of being in the open air. Here there is a magnificent organ and piano that is used by the masters to focus the harmonizing currents of the music of the spheres on behalf of the freedom of sons and daughters of God on earth. 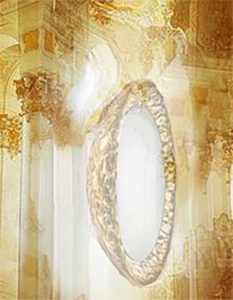 The Cosmic Mirror is on the east wall of the Crystal Chamber. When the disciple has reached a certain degree of attainment, he is taken by the master before the Cosmic Mirror, which keys into his etheric body and reflects his past lives, including the cause and effect upon his world of every thought, feeling, word and deed he has ever manifested. The Cosmic Mirror also reflects the original blueprint of his divine planthat is placed upon the etheric body when the soul is born in the heart of God.
[/soc_one_half]

In viewing his past lives, the disciple then may learn what portion of the divine plan he has outpictured. He may see what conditions in his world must be corrected and what good momentums he has developed that he can now use to overcome the difficulties of the past and the present and thus fulfill his divine plan in the very near future.

The Sphere of Light

At the far end of the audience hall, through a concealed door, one enters the Sphere of Light, a spherical-shaped room where the focus of the sacred fire is used to intensify the expansion of the light within those who are permitted to enter there. The function of this room correlates with the action of the light in the Cave of Light in the charge of the Great Divine Director in India.

Together with the Atomic Accelerator, these focuses serve to bring the disciples of the masters closer to their ascension and to provide them with the assistance to accelerate the process that could not be achieved in the outer world.

It is a very real and enlivening experience to stand before the Cosmic Mirror in this retreat. The disciple needs to be ready to look through the illusions, the fantasies and the synthetic self. He must be able to own up to the deceits that the ego continually practices against itself. It is not possible to hide anything from God.

The sincere student who would like to get rid of these illusions may call to Saint Germain to be taken to stand before the Cosmic Mirror.

This violet flame mantra for the Aquarian age is for accelerating personal and planetary spiritual transmutation of past errors in thought, feeling and action.

I AM a being of violet fire,
I AM the purity God desires.

Call to be Taken to Saint Germain’s Violet Flame Retreat.

In the name of the Christ, my own Real Self, I call to the heart of the I AM Presence and to the angel of the Presence to take me in my soul and in my soul consciousness to the Cave of Symbols retreat of Saint Germain. I ask that I be saturated with the violet flame focused there and be taught the mastery of the ritual of the atom for the Aquarian age. And I ask that all information necessary to the fulfillment of my divine plan be released to my outer waking consciousness as it is required. I thank thee and I accept this done in the full power of the risen Christ. 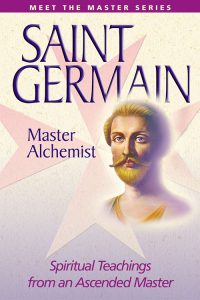 Meet the Master Saint Germain spiritual alchemist, through his lifetimes and key teachings on the violet flame and the 9 Steps of Precipitation. Buy direct from Summit Lighthouse bookstore or Kindle. 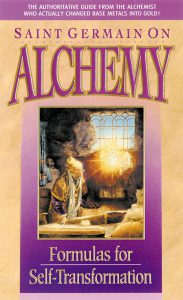 In the eighteenth century, this “Wonderman of Europe” was the confidant of kings and a friend to the poor. Today the master Saint Germain shows that miracles are nothing more than the natural outgrowth of the practice of spiritual alchemy. Buy direct from Summit Lighthouse bookstore or Kindle. 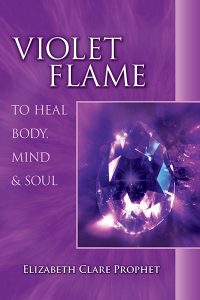 Healers and alchemists have used this high-frequency spiritual energy to bring about energetic balance and spiritual transformation. Learn how to apply the practical techniques in this book to create balance, harmony and positive change in body, mind and soul. Buy direct from Summit Lighthouse bookstore or Kindle.