Master of Paris’ Spiritual Retreat Of The Great White Brotherhood 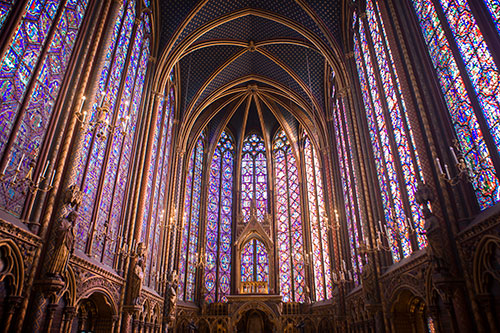 The Master of Paris has an etheric retreat over the Île de la Cité, which is the island in the Seine in the very heart of Paris and the birthplace of France. La Sainte-Chapelle is the anchor point of this retreat. The chapel has beautiful stained glass windows with brilliant blues and beautiful rubies. The light filtering through the glass focuses the aspects of the rays of God’s consciousness. The halls of justice, the supreme courts and the courts of France, reflecting the justice of Portia and Saint Germain, surround the focus of the Master of Paris.

The Master of Paris also maintains a physical focus in the city of Paris—one of the few physical focuses of the Brotherhood left on the planet—which he often frequents in a physical form. His retreat is a beautiful old castle-like residence with many windows overlooking the city of Paris. This focus is maintained by his disciples and is used frequently by the masters as a meeting place in Paris from which they can direct the energies necessary to hold the balance for the governments of Europe.

Archangel Zadkiel describes the purpose of this retreat in this way:

“Take the Master of Paris and that retreat in the very heart of the city. It has always been for the single-eyed purpose of keeping the flame of the seventh ray and thereby using it with Christ-discrimination to aid the blessed servants of God in embodiment who do endeavor to bring about world good—to infuse, then, their work, the work of their hands or their inventions or their art or their pure love for humanity, with a portion of that permanence that comes out of the cycles of the violet flame.”1

In 1967, Alexander Gaylord explained some of the functions of the retreat of the Master of Paris:

“Therefore, today, having just come from the academy of the Great White Brotherhood that is located on the outskirts of Paris, unknown to any even in the French state, I wish to call to your attention that we are able to assemble at inner levels a number of advanced souls who are taking very specific training in association with the Brotherhood for re-embodiment upon the planetary body and to assist Saint Germain in the coming next three decades.

“However, I think it well that this opportunity that is being given to them should also be passed to those of you who are in physical embodiment today. I think it also well if the young men [and women] who are associated with this endeavor would attempt occasionally to attend our academy while their physical form sleeps that they might receive the benefit of the total dedication that is manifest here to the purposes of the Great White Brotherhood…as the august body of world servers and as the emissaries of the Great Central Sun and the Great Central Sun Magnet.”2

According to the will of the masters, anyone, anywhere could be invited to enter this retreat as an initiate. No one is barred. We can go there physically, and it is within our grasp, but we bar ourselves, for we cannot enter these retreats until we have a certain attainment.

Call to Travel to the Retreat of the Master of Paris

Call in the name of your own Christ Self to the Master of Paris to travel to his retreat at night in you finer bodies to learn the spiritual lessons of his retreat.

In the name of the Christ, my own Real Self, I call to the heart of the I AM Presence and to the angel of the Presence, to Archangel Michael to take me in my soul and in my soul consciousness to the etheric retreat of the Master of Paris. I ask that I may learn more how to keep the violet flame of the seventh ray and to use it with Christ-discrimination to aid the blessed servants of God in embodiment. And I ask that all information necessary to the fulfillment of my divine plan be released to my outer waking consciousness as it is required. I thank thee and I accept this done in the full power of the risen Christ.