Retreat of Chananda in the Himalayas 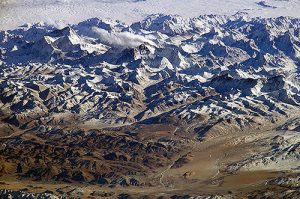 The Palace of Light is the home of Chananda and his sister, the ascended lady master Najah. El Morya, Saint Germain, the Great Divine Director, Daniel and Nada Rayborn and others of the ascended hosts frequent this retreat as guests.

The retreat is located in a valley in the Himalayan mountains; the Cave of Light (focus of the Great Divine Director in India) is situated in the mountain behind this retreat.

Godfré’s Description of the Palace of Light

Godfré Ray King journeyed to the Palace of Light with Alexander Gaylord and Rex, Nada, Bob and Pearl. In The Magic Presence he describes a magnificent building of white onyx, four stories high with a great dome in the center.

“As we came up the steps, the tones of a beautiful bell announced our arrival and welcomed us as guests of the retreat. In a moment, the great door opened and Najah stood there to greet us…. We were shown to our quarters on the second floor, overlooking the valley.”1

“Toward one end of the room stood an enormous teakwood table, seating at least twenty people, heavily inlaid with a substance that looked like gold, but was in reality a precipitated metal. Toward the other end of the room was a white onyx table of the same size, the top of which was inlaid in violet and gold, it too being a precipitated substance.”2

Godfré was taken on a tour of the retreat, seeing a music room, a “Cosmic Observatory” containing scientific instruments not yet known to the outer world, and a council chamber seating seven hundred people.

“The walls of this room were of a beautiful milk-white onyx with the most marvelous blue trimmings. On the floor was a thick carpet of the same wonderful blue. There were no windows, and the room occupied almost the entire floor of the palace….At the side was a dais on which stood an altar and a golden chair….The main part of the altar was precipitated gold, but the top was made of another precipitated substance, the shade of blue that borders on to violet.”3

On the ground floor were electrical and chemical laboratories, and in the center of the west wall, the entrance to the half-mile tunnel leading to the Cave of Light.

Call to Chananda to Visit the Palace of Light

A simple call to be taken to Chananda’s retreat.

In the name of the Christ, my own Real Self, I call to the heart of the I AM Presence and to the angel of the Presence and to Archangel Michael and a cordon of blue-lightening angels, to take me in my soul and in my soul consciousness, fully equipped with the armor of God, to the Palace of Light retreat of Chananda in the Himalayas.

I ask that my four lower bodies be charged and recharged with the Will of God, to learn the way of wisdom and the lessons of illumined action for the precipitation of the Christ consciousness, and to be given the formula for the victory of the love flame within my heart. And I ask that all information necessary to the fulfillment of my divine plan be released to my outer waking consciousness as it is required. I thank thee and I accept this done in the full power of the risen Christ.